More than 140 Trail Conference volunteers maintain the historic Appalachian National Scenic Trail from the Delaware Water Gap to Connecticut. That's nearly 160 miles! Ranging from easy to strenuous, there are portions of this trail for everyone; whether you're looking to section-hike or hike the entire 2,200 miles from Georgia to Maine as a thru-hiker.

The Appalachian Trail, known lovingly by hikers as the A.T., runs from Springer Mountain in Georgia to Mount Katahdin in Maine, a distance of about 2,160 miles. In the New York-New Jersey region, it spans more than 160 miles; from the Delaware Water Gap to Connecticut. The trail is uniformly marked with a 2" x 6" white-painted, vertical blaze.

Members of the Trail Conference met with Benton Mackaye in October 1922 to discuss his vision for the trail. The first section of the A.T. was built by Trail Conference volunteers from 1922-1923, from the Bear Mountain Bridge to the Ramapo River south of Arden in Harriman-Bear Mountain state parks. The A.T. through New York and New Jersey was completed by 1930.

The A.T. was designated a National Scenic Trail by Congress in 1968. The A.T. and a protective corridor are managed cooperatively by the National Park Service and the nonprofit Appalachian Trail Conservancy (ATC). The ATC delegates maintenance responsibilities to member trail clubs, including the Trail Conference, along the length of the trail. 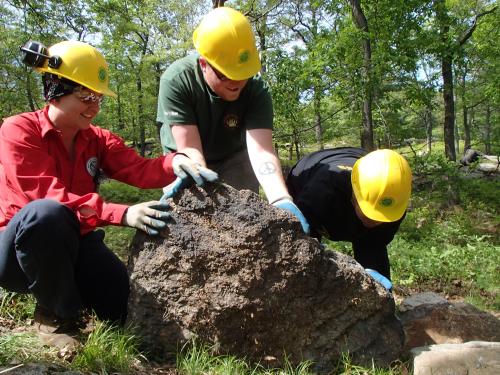 The A.T. on Bear Mountain is the focal point of a multi-year, multi-agency trail building and rehabilitation project being led by the Trail Conference.

Over 2 million people visit Bear Mountain each year, making this original section of the A.T. the most heavily used along the entire trail. When issues of heavy use and degradation came to a head in 2004, a plan was needed to accommodate the high volume of hikers and protect the mountain from being “loved to death.” Over 14 years, the Trail Conference rallied volunteers and supporters to help transform the Appalachian Trail at Bear Mountain from an eroded, 10-foot-wide scar into a safe, sustainable footpath. That was nearly 3,000 volunteers donating over 85,000 hours to care for and improve 2 miles of the trail.

Work on the tread itself involved hardening the trail with more than 1,300 granite steps, weighing an average of 500 to 800 lbs. each, from the bottom of Bear Mountain to its summit. This trail work was primarily done by hand. The project included building the first ADA-compliant section of the Appalachian Trail at a summit, and Trails for People, the first outdoor interpretive exhibit aimed at teaching park visitors how trails are made.

Backpacker Magazine named the Bear Mountain Trails Project the No. 1 trailbuilding project in the U.S. in 2008. In 2014, the magazine dubbed it a "masterpiece trail."

The Bear Mountain Trails Project received a 2019 Project of the Year Award by The Corps Network at a ceremony on Capitol Hill in Washington, D.C. This national award recognizes Corps that have undertaken especially noteworthy endeavors within the past year. The Trail Conference received this prestigious honor during The Corps Network’s 2019 national conference, “Resilience.”

AT Relocated on West Mountain in Harriman State Park

Click here to find details about this new relocation.