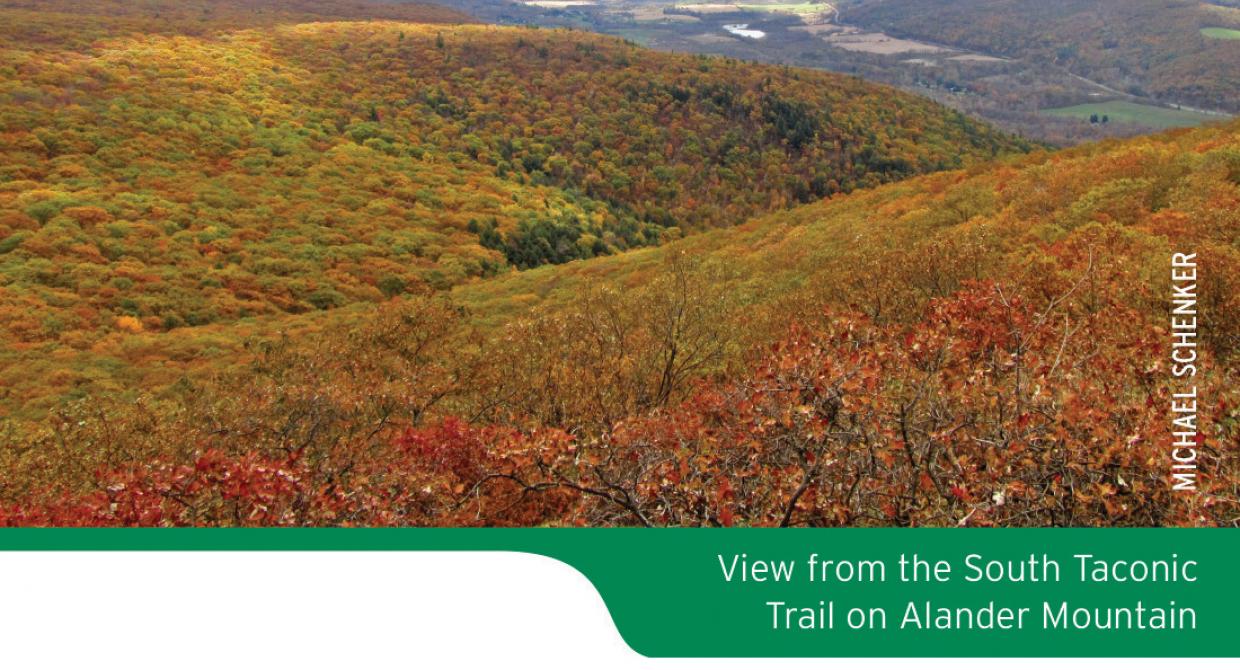 A completely new map built from the ground up, the third edition of the South Taconic Trails map has become the latest addition to the New York-New Jersey Trail Conference's catalog of quality trail maps.  This third edition is the first digitally-produced edition of this map and is an entirely different and vastly improved map from the previous 2006 edition.

Made by the people who build the trails, this map features more than 100 miles of marked trails throughout the South Taconic Mountains, which extends over three states -- Dutchess and Columbia Counties in New York, Berkshire County in Massachusetts, and Litchfield County in Connecticut.  A particularly valuable feature of the map is its inclusion of approximately 34 miles of the Appalachian Trail that passes through Massachusetts and Connecticut.  The 16-mile-long South Taconic Trail is shown in its entirety, with an additional six-mile extension of this trail shown as "under construction" while Trail Conference crews work on this ambitious project, anticipated to be completed in late 2015.

This new digitally-produced edition contains a number of enhancements over the previous analog edition.  The size of the map has been expanded to show all of Taconic State Park on a single map, and the map also includes several nearby parks and preserves with trails of their own.  Contour intervals have been increased from 100 feet to 20 feet for easier identification of steep terrain.  Trail mileage figures, representing distances between trail junctions, now appear next to the trails on the map front.  In addition, an enlarged inset map shows more detail of trails in the popular Bash Bish area and adjacent state park campground area at Copake Falls.

) technology and high-resolution aerial imagery.  Trail Conference volunteers spent numerous hours walking the trails with GPS receivers to obtain accurate trail data and identify viewpoints, campsites and shelters, parking areas, and other points of interest.  Special thanks go out to volunteer project manager, Kay Cynamon, who not only helped manage the new map but also GPSed the majority of the trails on the map.

At only $6.95 ($5.21 for Trail Conference members), this long awaited and much anticipated map is a must-have for enjoying the bountiful outdoor experiences throughout the South Taconics region.

About the Map Makers

The production of the East Hudson Trails Map 2014, 11th Edition Map Set, much like our other trail maps, was a great collaborative effort involving many volunteers, parks partners, and Trail Conference staff.

South Taconic Trails was produced with support from Campmor, an outdoor store and retail partner of the Trail Conference.

About the Trail Conference

The New York-New Jersey Trail Conference is a volunteer organization dedicated to creating, protecting and promoting the nation's finest network of foot trails in a major metropolitan area. The Trail Conference is a coalition of 100 clubs and 10,000 individual members that maintains over 2,000 miles of trails in New York and New Jersey. Its website, www.nynjtc.org, and its hiking books and trail maps provide detailed information that enable hikers to enjoy some of the most remarkable trails in the country.

Built on more than 75 years of mapping experience, New York-New Jersey Trail Conference maps are your source for reliable trail information in the New York-New Jersey metropolitan region. These maps are Made By the People Who Build the Trails and are regularly updated with changes to the trails.